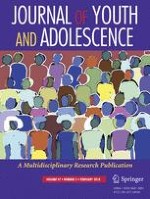 And What About Siblings? A Longitudinal Analysis of Sibling Effects on Youth’s Intergroup Attitudes

The Developmental Unfolding of Sibling Influences on Alcohol Use over Time