EQ-5D-Y is a generic measure of health status for children and adolescents aged 8–15 years. Originally, it has three levels of severity in each dimension (3L). This study aimed to develop a descriptive system of EQ-5D-Y with an increased number of severity levels and to test comprehensibility and feasibility.

The study was conducted in Germany, Spain, Sweden and the UK. In Phase 1, a review of existing instruments and focus group interviews were carried out to create a pool of possible labels for a modified severity classification. Participants aged 8–15 rated the severity of the identified labels in individual sorting and response scaling interviews. In Phase 2, preliminary 4L and 5L versions were constructed for further testing in cognitive interviews with healthy participants aged 8–15 years and children receiving treatment for a health condition.

In Phase 1, a total of 233 labels was generated, ranging from 37 (UK) to 79 labels (Germany). Out of these, 7 to 16 possible labels for each dimension in the different languages were rated in 255 sorting and response scaling interviews. Labels covered an appropriate range of severity on the health continuum in all countries. In Phase 2, the 5L version was generally preferred (by 68–88% of the participants per country) over the 4L version.

This multinational study has provided a version of the EQ-5D-Y with 5 severity levels in each dimension. This extended version (EQ-5D-Y-5L) requires testing its psychometric properties and its performance compared to that of the original EQ-5D-Y-3L. 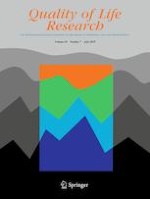 Racial/ethnic disparities in health-related quality of life and health status across pre-, early-, and mid-adolescence: a prospective cohort study

The effect of nature exposure on the mental health of patients: a systematic review

The association of age, literacy, and race on completing patient-reported outcome measures in pediatric oncology

Quality of life of cancer patients living in Trinidad and Tobago