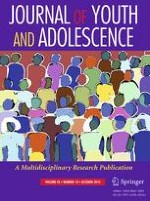 Is it About Me, You, or Us? Stress Reactivity Correlates of Discrepancies in We-Talk Among Parents and Preadolescent Children

Maternal Psychological Control and Its Association with Mother and Child Perceptions of Adolescent Adjustment: More Evidence on the Strength of Shared Perspectives