This is the first study to assess the validity the Chinese version of the Reactive and Proactive Aggression Questionnaire (RPQ). The RPQ was administered to 11 year-old participants in the China Jintan Child Cohort Study, a population-based longitudinal study of 1352 children. Similar to other studies, a two-factor solution with one reactive and one proactive subscale best described the data. Overall, the Chinese version of the RPQ had good construct validity, internal consistency, and test-retest reliability. These findings suggest that the RPQ is psychometrically similar when administered to children and adolescents in the United States and in China and need not be modified to measure aggressive behavior in Chinese samples. 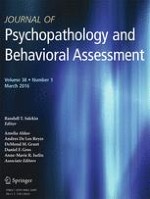 Impulsivity and Nonsuicidal Self-Injury: Examining the Role of Affect Manipulation

Validity and Reliability of the Interpersonal Competence Questionnaire: Empirical Evidence from an Italian Study