Recent research (Hajnal et al. in Perception 45(7):768–786, 2016) found apparent differences between haptic and visual perception of the affordance of stand-on-ability. One reason for this discrepancy might be the imprecision of the measurement method. We compared the psychophysical method of adjustment with a dynamic staircase method of stimulus presentation in an affordance task. Three groups of participants either visually inspected a flat sturdy sloped ramp, placed one foot onto the ramp occluded from view, or placed one foot on the ramp while allowed to look at it, in the visual, haptic, or multimodal condition, respectively. Each trial was presented by moving the ramp up or down until the participant perceived the action boundary, i.e., the steepest slope that still afforded upright stance. After perceptual trials, we measured the actual action boundaries by allowing participants to attempt to stand on the ramp. The action boundary was the average between the lowest false alarm and steepest hit within a 1.5° margin of difference. Visual perception was found to be equivalent with haptic perception. Perceptual and action boundaries were indistinguishable, but only when employing the more precise staircase method. The results support the postulate of equivalence among perceptual systems proposed by Gibson (The senses considered as perceptual systems. Houghton Mifflin Company, Boston, 1966), and the idea of correspondence between perception and action which is the cornerstone of affordance theory. 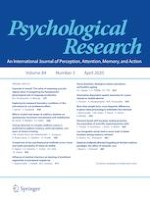 Distractor-based retrieval in action control: the influence of encoding specificity