There is a lack of performance comparisons of the generic quality of life tool EQ-5D-5L against disease- and treatment-specific measures in venous thromboembolism (VTE). The aim of this study was to compare EQ-5D-5L against the pulmonary embolism (PE)-specific PEmb-QoL and the deep vein thrombosis (DVT)-specific VEINES-QOL/Sym, and PACT-Q2 (treatment-specific) questionnaires in five language settings.

PREFER in VTE was a non-interventional disease registry conducted between 2013 and 2014 in primary and secondary care across seven European countries with five languages, including English, French, German, Italian and Spanish. Consecutive patients with acute PE/DVT were enrolled and followed over 12 months. Only patients who completed all three questionnaires at baseline were included in the study sample. The psychometric properties examined included acceptability (missing, ceiling and floor effects), validity (convergent and known-groups validity), and responsiveness. Known groups validity and responsiveness were assessed using both effect size (Cohen’s d) and relative efficiency (F-statistic). All analyses were conducted in each language version and the total sample across all languages.

A total of 1054 PE and 1537 DVT patients were included. 14% of PE and 10% of DVT patients had the maximum EQ-5D-5L index score. EQ-5D-5L was low to moderately correlated with other measures (r < 0.5). EQ-5D-5L was associated with larger effect size/relative efficiency in most of known group comparisons in both VTE groups. Similar results were observed for responsiveness. EQ-5D-5L performed relatively better in French, Italian and Spanish language versions.

Overall EQ-5D-5L is comparable to PEmb-QoL, VEINES-QOL/Sym and PACT-Q2 in terms of acceptability, validity and responsiveness in both PE and DVT populations in English, French, German, Italian and Spanish language version. Nevertheless, it should be noted that each measure is designed to capture different aspects of health-related quality of life. 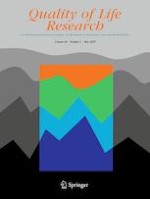 Correction to: Burden of caregivers of adult patients with schizophrenia in a predominantly African ancestry population

Effects of a simple home exercise program and vitamin D supplementation on health-related quality of life after a hip fracture: a randomized controlled trial