» Naar de samenvatting
Kaylee Eady and Katherine Moreau’s [ 1] article in this issue raises a number of complex, interconnected issues. It is not uncommon for research to report people’s perceptions about what they might do, rather than what they actually do. Indeed, this perspective is noted as a limitation to their study by the authors themselves:

This study described residents’ and physician-educators’ perceptions of how they would use parent feedback, and does not report descriptions of their actual use of this feedback.’ (My emphases).

The choice to not study ‘actual use’ of feedback in clinical practice seems to me to be a flaw in research design, an inevitable consequence of which is that the study report is peppered with use of the conditional tense—‘would’ and ‘could’. In situating the study’s results in the world of the possible and not the actual, the authors mirror the common medical education practice of learning through simulation.
That clinicians and medical educators would use feedback from patients and family members in a paediatric context is assumed—collaborative decision-making is surely a sine qua non for both medicine and medical education in an era that strives for democratic practices. How such feedback might be used promises a new level of insight, but readers are instead offered a foregone conclusion rather than a research revelation: 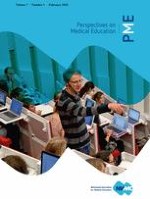 The do’s, don’t and don’t knows of supporting transition to more independent practice