Asperger Through the Looking Glass: An Exploratory Study of Self-Understanding in People with Asperger’s Syndrome | mijn-bsl Skip to main content
ZOEKEN MENU 1 2 3 4

Hobson (Autism and the development of mind. Lawrence Erlbaum, Hove, UK 1993) has proposed that the cognitive and linguistic disabilities that characterise autism result from abnormalities in inter-subjective engagement during infancy, which in turn results in impaired reflective self-awareness. The aim of the present study was to test Hobson’s hypothesis by examining self-understanding in Asperger’s syndrome (AS) using Damon and Hart’s (Self-understanding in childhood and adolescence. Cambridge University Press, Cambridge, 1988) model of self-concept. Ten participants with Asperger’s syndrome were compared with ten non AS controls using the Self-understanding Interview (Damon and Hart in Self-understanding in Childhood and Adolescence. Cambridge University Press, Cambridge, 1988). The study found that the Asperger’s group demonstrated impairment in the “self-as-object” and “self-as-subject” domains of the Self-understanding Interview, which supported Hobson’s concept of an impaired capacity for self-awareness and self-reflection in people with ASD. The results are discussed with reference to previous research regarding the development of self-understanding in people with ASD.
vorige artikel Predictive Factors of Participation in Postsecondary Education for High School Leavers with Autism
volgende artikel Differentiation of High-Functioning Autism and Asperger’s Disorder Based on Neuromotor Behaviour 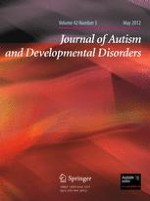 The Broad Autism Phenotype Questionnaire: Mothers Versus Fathers of Children with an Autism Spectrum Disorder

Symbolic Play of Preschoolers with Severe Communication Impairments with Autism and Other Developmental Delays: More Similarities than Differences