Reduced amplitude of the P300 event-related potential has been consistently associated with a variety of externalising problems, including conduct disorder. The few available genetically-informative studies of these relationships, however, were conducted among adolescents/adults (i.e., at an age when conduct disorder has typically already become manifest). Among 200 general population twins with a mean age of 9 years (range 6–14 years), we studied the relationship between the P300 waveform elicited by an auditory oddball task and the DSM-oriented conduct problems scale of the Child Behavior Checklist 6–18. Conduct problems scores were negatively and significantly correlated (r = −0.19, p = 0.01) with P300 amplitude; correlations between P300 amplitude and the other DSM-oriented Child Behavior Checklist scales were non-significant, except for oppositional defiant problems (p = 0.01). We found moderate heritability estimates for both P300 amplitude (0.58, CI:0.37;0.73) and conduct problems (0.52, CI:0.25;0.70). Bivariate twin analyses indicated that the covariation between these two phenotypes can be explained by additive genetic factors only, with a genetic correlation of −0.33. An association between reduced P300 amplitude and conduct problems can be substantiated already in childhood, at an age that precedes the most typical onset of conduct disorder. This relationship appears to be genetic in nature. Reduced P300 amplitude can represent a valuable marker for conduct problems, and can contribute to the early identification of children at high-risk for conduct disorder.
vorige artikel Delineating Selection and Mediation Effects Among Childhood Personality and Environmental Risk Factors in the Development of Adolescent Substance Abuse 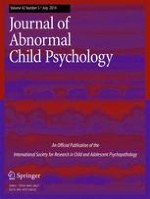 Self-Esteem and Social Support as Moderators of Depression, Body Image, and Disordered Eating for Suicidal Ideation in Adolescents