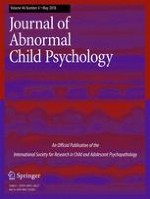 Functions of Aggression and Peer Victimization in Elementary School Children: the Mediating Role of Social Preference

Inattentive Behavior in Boys with ADHD during Classroom Instruction: the Mediating Role of Working Memory Processes

A Unique Path to Callous-Unemotional Traits for Children who are Temperamentally Fearless and Unconcerned about Transgressions: a Longitudinal Study of Typically Developing Children from age 2 to 12