This cross-sectional study is the first to examine the developmental trajectory of temporal attention control from childhood to adolescence. We used a rapid serial visual presentation paradigm, calling for the identification of two targets (T1 and T2) embedded in a distractor stream. In adults, manipulating the lag time within the target doublet typically leads to pronounced impairment in report for T2, when it follows T1 after approximately 200 ms, with one intervening distractor (lag 2); this is referred to as the attentional blink (AB). Participants, however, tend to identify T2 more often when the targets have occurred in a row (“lag-1 sparing”), or are separated by larger lag times, resulting in a hook-shaped accuracy profile. Here, we investigated the extent to which this AB profile undergoes systematic developmental changes in 204 students aged between 6 and 16 years (grades 1–10). T1–T2 lags varied from zero up to seven intervening distractors. Behavioral accuracy in younger children (grades 1–2) was found to follow a linear path, having its minimum at the earliest lag. Lag-1 sparing, accompanied by a relative accuracy loss in the AB interval, first appeared in grade 3, and became more robust in grade 4. From grades 5–6, the hook-shaped profile remained stable, with steady increases in overall performance up through the highest grades. This suggests that younger children’s performance is limited by processing speed, while from preadolescence onwards, children are increasingly able to identify rapid target sequences at the cost of an interference sensitive, higher control system. 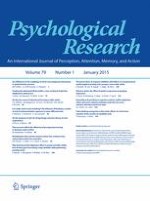 Task switching among two or four tasks: effects of a short-term variation of the number of candidate tasks