Titel
Through the eyes of a medical student
Auteur
Dustin Jacobson 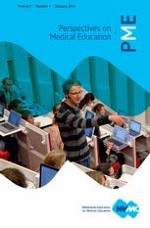 The effect of a daily quiz (TOPday) on self-confidence, enthusiasm, and test results for biomechanics

Students as teachers: the value of peer-led teaching

Interactive E-learning module in pharmacology: a pilot project at a rural medical college in India