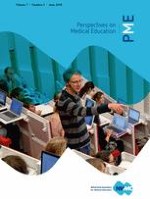 Getting with the times: a narrative review of the literature on group decision making in virtual environments and implications for promotions committees

Characterizing the literature on validity and assessment in medical education: a bibliometric study