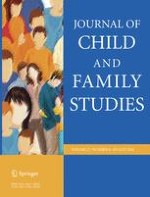 Math Intervention For Latino Parents and Kindergarteners Based on Food Routines

What Matters Most to the Left-Behind Children’s Life Satisfaction and School Engagement: Parent or Grandparent?

Eating Disorders in an Israeli Women’s Prison: Correlates of the Risk