The study of adolescence may have come of age, but it remains debatable whether research appropriately considers the ethnic diversity of adolescence. Given a heightened interest in supporting a more inclusive approach to adolescent research, this study takes stock of how seriously we actually are pursuing a more inclusive study of adolescence. To do so, this study examines the extent to which six leading journals dedicated to the study of adolescence publish articles that include ethnic participants, report the nature of that inclusion, and present findings that consider the ethnic dimensions of their samples. Although results reveal some diversity among journals, trends do emerge. For example, the study of adolescence is quite international: overall, more than 40% of 1283 empirical articles (published from 2000 to and including 2006) report findings from non-U.S. samples. If we remove international studies from our analyses, we find that the vast majority of studies (93%) describe the ethnic composition of their samples. That finding diverges considerably from reports from other fields of research. Also unlike other fields of research, studies from journals on adolescence do tend to include ethnic groups. The majority (68%) of articles actually do not have samples with a majority of participants from European American groups. Over 40% of articles present empirical analyses relating to identified ethnic groups, and at least 19% present findings that focus on one ethnic group (rather than comparing one to another). We do, however, find relatively ignored groups (such as Native and Asian Americans) and a tendency to lump diverse groups into five dominant ethnic groups or into “other” groups. We place these findings in the context of research on adolescence and explore their significance. 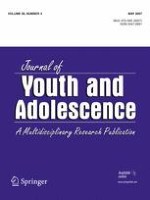 Examining Resource and Protective Factors in the Adjustment of Latino Youth in Low Income Families: What Role Does Maternal Acculturation Play?