Epidemiological research suggests that different indicators of socioeconomic status (SES) such as income and education may have independent and/or interactive effects on health outcomes. In this study, we examined both simple and more complex associations (i.e., interactions) between different indicators of SES and ambulatory blood pressure (ABP) during daily life. Our sample consisted of 94 married couples who completed a one-day ABP protocol. Both income and education were independently related to systolic blood pressure and only income was significantly related to diastolic blood pressure. There were also statistical interactions such that individuals with high levels of both income and education evidenced the lowest ABP. Gender moderated these findings. Three-way interactions revealed that, in general, women appear to benefit from either indicator of SES, whereas men appear to benefit more from income. The findings are consistent with epidemiological research and suggest one important physiological mechanism by which income and education may have independent and interactive effects on health.
vorige artikel Minority stress and physical health among sexual minority individuals
volgende artikel Social support as a protective factor for depression among women caring for children in HIV-endemic South Africa 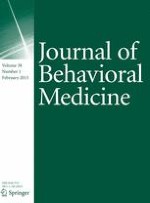 Glycemic control among U.S. Hispanics/Latinos with diabetes from the HCHS/SOL Sociocultural Ancillary Study: Do structural and functional social support play a role?

Physical activity levels and patterns in older adults: the influence of a DVD-based exercise program