Previous research has shown memory deficits in obsessive–compulsive disorder (OCD) but has been inconsistent as to which aspects of memory are affected and how deficits are linked to OCD symptoms. The current study assessed working, episodic and semantic memory in 19 subjects with OCD and 19 matched controls. The severity of OCD symptoms was assessed using a clinician-rated scale (Yale-Brown Obsessive–Compulsive Scale, Y-BOCS) and a self-report measure (Padua Inventory-Revised, PI-R). Episodic and semantic memory performance was significantly reduced in OCD subjects relative to controls while working memory was preserved. Episodic memory performance in both OCD and healthy control subjects was significantly related to the Padua dimensions Rumination and Checking even if the influence of depressive mood and total OC symptom severity was controlled for. Linear regression revealed that Rumination was most closely related to episodic memory performance in both OCD and healthy control subjects above Checking. Results point to the possible impact of self-focused attention on effortful encoding processes.
vorige artikel An Investigation of Factors Associated with Cognitive Avoidance in Worry
volgende artikel Social Problem-Solving Processes and Mood in College Students: An Examination of Self-report and Performance-based Approaches 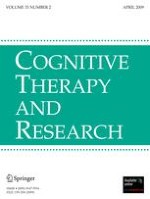 Phenomenological Characteristics of Attentional Biases Towards Threat: A Critical Review

Feeling Better and Smoking Less: The Relationship Between Trauma Symptoms and Smoking Over Time

Implicit and Explicit Attitudes Toward Spiders: Sensitivity to Treatment and Predictive Value for Generalization of Treatment Effects

An Investigation of Factors Associated with Cognitive Avoidance in Worry

The Effects of Inaccurate Expectations on Experiences with Psychotherapy