Reciprocal Effects of Alcohol Use and Violence Perpetration Among Early Adolescents in Mexico: A Gendered Analysis | mijn-bsl Skip to main content
ZOEKEN MENU 1 2 3 4

Although substance use and violent behaviors often emerge together in adolescence, and both have similar widely cited causes and negative consequences for development, it remains unclear whether and how they may be linked causally. This study of early adolescents in Mexico’s three largest cities tested whether alcohol use and violence perpetration are temporally related, whether their relationship is unidirectional or reciprocal, and whether the relationship differs by gender and the type of violence. The study employed longitudinal data from seventh grade students (N = 4830; M age = 12.0, range 11–15; 49% female) in 18 public middle schools in Mexico City, Guadalajara and Monterrey. Students completed questionnaires at the beginning, middle, and end of the 2014–2015 academic year. Students’ responses to a multi-dimensional violence assessment emerged in two distinct patterns: criminally violent acts, and bullying/aggression. Although males engaged in both types of violence more frequently than females at all three time points, they used alcohol more frequently than females only at the first survey, after which the gender gap disappeared. Cross-lagged multi-group path models showed that, for both males and females, more frequent alcohol use predicted subsequent increases in criminally violent behavior, and bullying/aggression predicted later increases in alcohol use. Reciprocal associations varied by gender and type of violence: Alcohol use was reciprocally linked to criminally violent behavior among males only, and reciprocally linked to bullying-aggression among females alone. The results are interpreted in the context of sharply increasing rates of violence in Mexico and changing gender norms, with implications for youth prevention programs.
vorige artikel Social Ties Cut Both Ways: Self-Harm and Adolescent Peer Networks
volgende artikel The Longitudinal Association between Perceived Powerlessness and Sexual Risk Behaviors among Urban Youth: Mediating and Moderating Effects 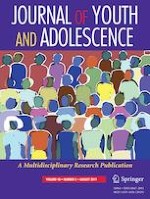 Aggressive Video Games are Not a Risk Factor for Future Aggression in Youth: A Longitudinal Study