This study examined the prevalence of screened posttraumatic stress disorder (PTSD) and associated diabetes-related outcomes. A sample of American Indian adults with type 2 diabetes (n = 218) participated in interviewer-administered surveys. Using a cutoff of 3 on the Primary Care PTSD screener, 21.8 % of participants screened positive for PTSD. PTSD symptoms were negatively associated with self-rated health status and positively associated with past year hospitalization after controlling for several demographic factors, but not after controlling for depressive symptoms. Past month frequency of hyperglycemia symptoms was not related to PTSD symptoms. When grouped by mental health conditions (neither screened PTSD nor depressive symptoms, screened PTSD only, depressive symptoms only, and both), those with both screened PTSD and depressive symptoms reported the highest proportion of any past month hyperglycemia, past year hospitalization, and low self-rated health status. Screened PTSD, especially in those with comorbid depressive symptoms, is an important consideration in diabetes care.
vorige artikel Psychosocial predictors of long-term mortality among women with suspected myocardial ischemia: the NHLBI-sponsored Women’s Ischemia Syndrome Evaluation
volgende artikel The relationship between perceived promotion of autonomy/dependence and pain-related disability in older adults with chronic pain: the mediating role of self-reported physical functioning 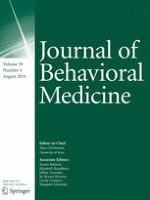 Erratum to: Measuring insulin adherence among adults with type 2 diabetes

An evaluation of factors associated with sexual risk taking among Black men who have sex with men: a comparison of younger and older populations

Is waiting bad for subjective health?