Psychiatric disorder prevalence has been shown demonstrably higher among justice-involved adolescents than youth in the general population. Yet, among arrested juveniles, little is known regarding racial/ethnic differences in disorder prevalence, the role of trauma exposure in the diagnosis of behavioral disorders, or subsequent psychiatric treatment provided to adolescents with such diagnoses. The current study examines racial/ethnic disparity in psychiatric diagnoses and treatment of behavioral disorders associated with delinquency, controlling for traumatic experiences, behavioral indicators, and prior offending among serious juvenile offenders. Logistic regression is employed to explore the racial/ethnic disproportionality in behavioral disorder diagnoses and psychiatric treatment provision among 8763 males (57.7 % Black, 11.8 % Hispanic) and 1,347 females (53.7 % Black, 7.6 % Hispanic) admitted to long-term juvenile justice residential placements in Florida. The results indicate Black males are 40 % more likely, and Black females 54 % more likely to be diagnosed with conduct disorder than Whites, even upon considerations of trauma, behavioral indicators, and criminal offending. Black and Hispanic males are approximately 40 % less likely to be diagnosed with ADHD than White males, with no racial/ethnic differences for females. Importantly, Black males are 32 % less likely to receive psychiatric treatment than White males, with no differences between White and Hispanic males, or any female subgroups. Traumatic exposures increased the odds of oppositional defiant disorder and ADHD, but not conduct disorder for males, though adverse childhood experiences were unrelated to behavioral disorder diagnoses among females.
vorige artikel Risk and Outcomes: Are Adolescents Charged with Sex Offenses Different from Other Adolescent Offenders?
volgende artikel Youth’s Perceptions of Parental Support and Parental Knowledge as Moderators of the Association Between Youth–Probation Officer Relationship and Probation Non-compliance 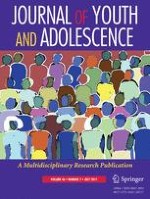 A Jury of Their Peers: A Meta-Analysis of the Effects of Teen Court on Criminal Recidivism

The Mobility of Youth in the Justice System: Implications for Recidivism

Risk and Outcomes: Are Adolescents Charged with Sex Offenses Different from Other Adolescent Offenders?