Psychometric properties of the Japanese version of the EQ-5D-Y by self-report and proxy-report: reliability and construct validity | mijn-bsl Skip to main content
TOOLBAR 1 2 3 4
ZOEKEN MENU 1 2 3 4

This study aimed to assess psychometric properties of the Japanese version of the EQ-5D-Y (3 levels) with a focus on feasibility, reliability, and construct validity.

Respondents were recruited from the general populations of three cities in Japan. First, children and adolescents responded to the EQ-5D-Y and PedsQL by self-report. Parents were also asked to evaluate the health states of their children/adolescents using proxy versions of these questionnaires. Next, the EQ-5D-Y was mailed to their residence approximately 2 weeks later, and both children/adolescents and their parents responded to the questionnaire. Reliability was confirmed by self-report test–retest methods and a comparison of self-report responses with proxy responses. Spearman’s correlation coefficients were calculated between responses to the EQ-5D-Y and both responses to and scores of the PedsQL in order to assess construct validity.

A total of 654 children/adolescents from aged 8 to 15 (median age: 11) responded to the questionnaires at both the first- and second-stage surveys. Test–retest agreement was sufficiently high and was influenced by age. Proxy test–retest results revealed that parents’ responses were more reliable compared to the self-report results. Some correlations (|r| > 0.3) between items of the EQ-5D-Y and PedsQL were found. Meanwhile, no correlations were found between proxy responses to the EQ-5D-Y and self-report responses to the PedsQL. 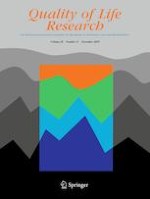 The link between sexual satisfaction and subjective well-being: a longitudinal perspective based on the German Ageing Survey