To study the psychometric properties, including reliability, validity and responsiveness, of the Spanish EQ-5D-5L questionnaire for patients with hip or knee osteoarthritis (OA).

We included 758 patients with hip or knee OA who completed the EQ-5D-5L and Western Ontario and McMaster Universities Osteoarthritis Index (WOMAC) at baseline, of whom 644 also did 6 months later. The EQ-5D-5L contains five questions from which a utility index is derived. The WOMAC covers three dimensions: pain, stiffness and physical function. Floor and ceiling effects were calculated. Reliability was assessed using Cronbach’s alpha. Convergent validity was tested using the Spearman correlation coefficient between EQ-5D-5L and WOMAC. We examined known-groups validity by comparing the EQ-5D-5L between subgroups defined by WOMAC scores using ANOVA or the Kruskal–Wallis test. Effect sizes were calculated to assess responsiveness, and minimal clinically important difference (MCID) was estimated.

The results support the reliability, validity and responsiveness of the EQ-5D-5L, overcoming the limitations of the EQ-5D-3L in these patients. Therefore, the EQ-5D-5L could be very useful as an outcome measure, at least in patients with hip or knee OA. 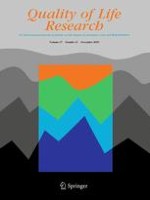 Physical, sensory, and cognitive functioning among centenarians: a comparison between the Tokyo and Georgia centenarian studies

Evaluation of opioid use among patients with back disorders and arthritis

The impact of depression on health-related quality of life and wellbeing: identifying important dimensions and assessing their inclusion in multi-attribute utility instruments