This study was designed to assess the prevalence of psychiatric disorders and the impact of impairment criteria on rates of diagnoses in a representative sample of elementary school children from a country in a region. We sampled 419 primary school children by using a one-stage design in Izmir, Turkey. The response rate was 99.5 % and 417 cases were assessed using the Schedule for Affective Disorders and Schizophrenia for School-Age Children Present and Lifetime Version and a scale to assess the impairment criterion. The results showed that 36.7 % of the sample met DSM-IV criteria independent of impairment and that 14.1 % of the population had one or more DSM-IV disorders when a measure of impairment specific to each diagnosis was considered. The most prevalent disorders were attention-deficit/hyperactivity disorder and anxiety disorders. This study provided the first estimates of the prevalence of specific DSM-IV-defined psychiatric disorders in Turkish population of children.
vorige artikel Stressful Life Events and Child Anxiety: Examining Parent and Child Mediators
volgende artikel Family Functioning and Dysfunctional Eating Among Italian Adolescents: The Moderating Role of Gender 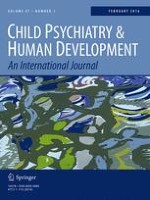 The Children’s Sleep Comic: Psychometrics of a Self-rating Instrument for Childhood Insomnia