Evidence is accumulating for the transgenerational effects of maternal stress on offspring. A particular increasing concern is the possible transgenerational effects of community exposure to war and terror. Here, 107 mothers that had been exposed to war, were assessed with their 3 year old children (52 % girls) who had been conceived after the end of the war, and thus never directly exposed to war. The circumscribed nature (missile bombardment) and temporal limits (34 days) of the tragic 2006 Lebanon war in the north of Israel, affords a unique methodological opportunity to isolate an epoch of stress from preceding and subsequent normal life. We find that war experience engenders higher levels of mothers’ separation anxiety, lower emotional availability in mother-child interaction, and lower levels of children’s adaptive behavior. The novelty of these findings lies in documenting the nature and strength of transgenerational effects of war-related stress on offspring that were never exposed. In addition, because these effects were obtained after 4 years of a continuing period of normality, in which the children were born and raised, it suggests that an extended period of normality does not obliterate the effects of the war on mother and child behavior as assessed herein. Despite the study limitations, the results are indicative of persisting transgenerational effects of stress.
vorige artikel Clinical Decision-Making Following Disasters: Efficient Identification of PTSD Risk in Adolescents
volgende artikel Aroused at Home: Basic Autonomic Regulation during Orthostatic and Physical Activation is Altered in Children with Social Anxiety Disorder 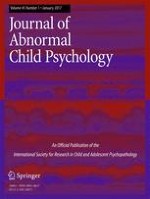 Are Proactive and Reactive Aggression Meaningful Distinctions in Adolescents? A Variable- and Person-Based Approach

Aroused at Home: Basic Autonomic Regulation during Orthostatic and Physical Activation is Altered in Children with Social Anxiety Disorder