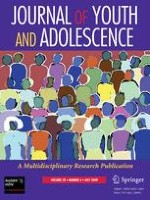 Negative Adult Influences and the Protective Effects of Role Models: A Study with Urban Adolescents