Several studies have indicated that an early onset of delinquent and problem behaviors is associated with a greater risk of subsequent behavioral and mental health problems. This study builds on that literature by examining histories of behavior problems in relation to indicators of thriving and precocious behavior during late adolescence. Using longitudinal data from 289 high-risk adolescents, participants were classified according to their problem behavior histories at ages 15 and 19. Findings indicated that although some adolescents experienced decline over time in their overt behavior problems, those youth showed fewer indicators of thriving when compared to adolescents with no history of behavior problems. Youth with an earlier onset of behavior problems also evinced an increased risk for precocious behavior. Gender differences and implications for prevention through youth development programming are discussed. 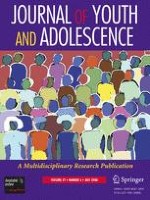 Familial Correlates of Overt and Relational Aggression between Young Adolescent Siblings

Kathleen A. Bogle, Hooking up: Sex, Dating, and Relationships on Campus