The current study was designed to replicate and extend previous findings that demonstrate the efficacy of virtual reality (VR) technology to facilitate salient experiences of positive affect and wellbeing in response to meditative tasks, by (1) evaluating the phenomenological variables vividness, egocentricity, and immersiveness, as mediators of variability in positive affective response, and by (2) evaluating individual differences in trait absorption as a predictor of variability in positive affective response.

The current experiment included 48 undergraduate students, all of whom completed both a brief VR and non-VR guided meditation session. Participants self-reported affective and meditative responses after each session using a battery of questionnaires.

Guided meditation in VR is associated with increased positive affect in comparison to non-VR meditation partly due to its effects on egocentricity and immersiveness, especially among participants high in trait absorption. 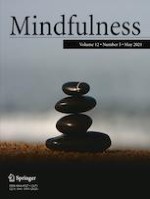 Effects of Mindfulness-Based Cognitive Therapy in Pregnancy on Psychological Distress and Gestational Age: Outcomes of a Randomized Controlled Trial

Who Benefits Most from a Brief Mindfulness Intervention to Reduce Anxiety During Stereotactic Breast Biopsy: the Moderating Effect of Trait Mindfulness, Spiritual Well-being, and Distress Tolerance

Mindfulness-Based Eating Intervention in Children: Effects on Food Intake and Food-Related Behaviour During a Mid-morning Snack

A Preliminary Investigation on the Effectiveness of Compassionate Mind Training for Students with Major Depressive Disorder: a Randomized Controlled Trial