Is Clinical Anxiety a Risk or a Protective Factor for Executive Functioning in Youth with ADHD? A Meta-regression Analysis | mijn-bsl Skip to main content
TOOLBAR 1 2 3 4
ZOEKEN MENU 1 2 3 4

Comorbidity rates between ADHD and anxiety disorders (AD) are high, but little is known about the nature of this co-occurrence. A dominant idea is that AD may intensify some (i.e., attention and working memory) and attenuate other (i.e., inhibition) ADHD symptoms. Results are mixed, potentially because of between-study differences. To investigate this further we performed a meta-regression analysis on 11 studies (n ‘ADHD-only’ = 695; n ‘ADHD + AD’ = 608), containing 35 effect sizes on attention, inhibition and working memory. Main results were: (1) no evidence of a negative effect of AD on attention and working memory; (2) better response inhibition in children with ADHD with AD than those with only ADHD (medium ES g = − .40); (3) medication moderated this association: the effect seemed limited to studies that included medication-naïve participants; (4) the difference between the two groups increased with age for attention and with proportion of boys for working memory ability. There was no effect of comorbid disruptive behavior disorder. In conclusion, AD seems to be a protective factor for inhibition problems as assessed with laboratory tasks in ADHD, especially in children who are medication naïve. Further, AD may have a protective function for attention in older children, and for working memory in boys with ADHD. It is therefore important to screen for AD when diagnosing ADHD, and to educate those with comorbid AD about the possible positive function of feeling anxious. Potential negative effects of ADHD medication on inhibition in children with comorbid AD should be considered. 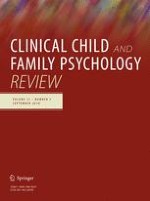 Transformation of Adolescent Peer Relations in the Social Media Context: Part 1—A Theoretical Framework and Application to Dyadic Peer Relationships

Psychological Treatments for Mental Disorders in Children and Adolescents: A Review of the Evidence of Leading International Organizations

The Interaction Between Child Behavioral Inhibition and Parenting Behaviors: Effects on Internalizing and Externalizing Symptomology

What is the Impact of Placement Type on Educational and Health Outcomes of Unaccompanied Refugee Minors? A Systematic Review of the Evidence