To pilot the newly developed Idio Scale Judgment method for estimating the amount of score change that matters to patients (i.e., change thresholds).

An online panel of 500 participants diagnosed with multiple sclerosis (MS) responded to the Neuro-QoL fatigue scale and to demographic and clinical questions. Participants compared their own fatigue to that represented by seven short form summaries (SFSs) that were located relatively close to their own fatigue levels. They judged these as representing the same, greater, or less fatigue than their own. We calculated the distances between patients’ own levels of fatigue and the location of SFSs they endorsed as a change that would make a difference in daily life. These distances were used as estimates of change thresholds. Logically inconsistent judgments were tabulated and associations with clinical and demographic variables were estimated.

Change thresholds based on mean individual thresholds for consequential change were calculated for improvement (−3.5) and worsening (3.2). The majority of participants had no logically inconsistent judgments (69%). Having one or more reversals in judgment was not significantly associated with education or fatigue score, but was weakly associated with age, gender, and MS type and moderately associated with ratings of confidence in SFS comparisons.

As piloted, Idio Scale Judgment had a number of design strengths. Participants made comparisons to levels of fatigue that were within range of their own, and their judgments were contextualized in personally relevant consequences. The design lends itself to collection of data in large samples allowing evaluation of the range of judgments. Some study limitations could be mitigated with modifications. We concluded that the Idio Scale Judgment has substantial promise as a new tool for estimating change thresholds. 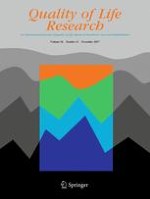 Resilience to health challenges is related to different ways of thinking: mediators of physical and emotional quality of life in a heterogeneous rare-disease cohort