To evaluate the extent of differential item functioning (DIF) within the thyroid-specific quality of life patient-reported outcome measure, ThyPRO, according to sex, age, education and thyroid diagnosis.

A total of 838 patients with benign thyroid diseases completed the ThyPRO questionnaire (84 five-point items, 13 scales). Uniform and nonuniform DIF were investigated using ordinal logistic regression, testing for both statistical significance and magnitude (∆R 2 > 0.02). Scale level was estimated by the sum score, after purification.

Twenty instances of DIF in 17 of the 84 items were found. Eight according to diagnosis, where the goiter scale was the one most affected, possibly due to differing perceptions in patients with auto-immune thyroid diseases compared to patients with simple goiter. Eight DIFs according to age were found, of which 5 were in positively worded items, which younger patients were more likely to endorse; one according to gender: women were more likely to report crying, and three according to educational level. The vast majority of DIF had only minor influence on the scale scores (0.1–2.3 points on the 0–100 scales), but two DIF corresponded to a difference of 4.6 and 9.8, respectively. 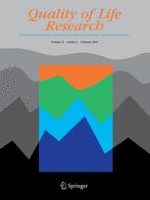 The association between motor vehicle injuries and health-related quality of life: a longitudinal study of a population-based sample in the United States

A conceptual model of health-related quality of life in sarcoidosis