This paper examines whether family structure and its transitions are associated with internalizing and externalizing psychiatric disorders among Puerto Rican-origin children. It uses longitudinal data (three waves) from the Boricua Youth Study, which includes probability samples of children in the South Bronx (New York) and San Juan (Puerto Rico) (n = 2,142). We also examine factors which may explain how family structure and transitions may be related to child psychiatric disorders. Our results show that for both internalizing and externalizing disorders there were no significant differences between children of cohabiting (biological or step) parents or of single parents compared to children of married biological parents. In Puerto Rico only, transitioning once from a two-parent family to a single-parent family was related to child internalizing disorders. Family transitions were not associated with externalizing disorders at either site. Context may be an important factor shaping the risk that family dissolution is followed by an internalizing disorder among children.
vorige artikel Parents’ Experiences of Nonsuicidal Self-Injury Among Adolescents and Young Adults
volgende artikel Facets of Adult Social Competence as Predictors of Parenting Style 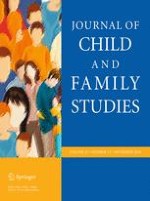 Intimate Partner Acceptance–Rejection and Subjective Well-Being: What is the Role of Resilience?

High-Risk Behavior Among Young Adolescents in The Central and Northern Region of Peninsular Malaysia: Baseline Data from The MyHeART Study