Executive Functioning in Children with an Autism Spectrum Disorder: Can We Differentiate Within the Spectrum? | mijn-bsl Skip to main content
ZOEKEN MENU 1 2 3 4

The aim of this study was to investigate whether children with high-functioning autism (HFA), Asperger’s syndrome (AS), and pervasive developmental disorder not otherwise specified (PDDNOS) can be differentiated from each other and from normal controls on their neurocognitive executive functioning (EF) profile. Children with HFA and AS showed the most EF deficits. The EF profile of the PDDNOS group was more disturbed that the normal control group, but was less disturbed than the profile of the HFA and AS groups. Little difference was found between the three PDD subtypes with respect to EF. This study supports the view that executive dysfunctioning plays an important role in autism. The usefulness of a distinction between different PDD subtypes was not demonstrated.
vorige artikel The Autism-Spectrum Quotient (AQ)—Adolescent Version
volgende artikel Cognitive and Symptom Profiles in High-Functioning Pervasive Developmental Disorder Not Otherwise Specified and Attention-Deficit/Hyperactivity Disorder 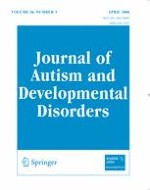 The Development of Face Processing in Autism

Brief Report: “The Autism Epidemic”. The Registered Prevalence of Autism in a Swedish Urban Area

Refinement of the Children’s Social Behavior Questionnaire (CSBQ): An Instrument that Describes the Diverse Problems Seen in Milder Forms of PDD