Evaluating the content of a patient-reported outcome measure for people with multimorbidity: a Delphi consensus | mijn-bsl Skip to main content
TOOLBAR 1 2 3 4
ZOEKEN MENU 1 2 3 4

Evidence supporting multimorbidity-adapted interventions is scarce, mostly due to a lack of adapted outcome measures. Measurement constructs for a novel patient-reported outcome measure (PROM) were defined in previous studies using a literature review, a qualitative description from stakeholders, and an item pool identification process. The aim of this study was to attain consensus on the content of this novel PROM.

A three-round electronic modified Delphi technique was conducted using an academic and clinical expert panel. Using a Likert scale, the panel rated the relevance, improvability, and self-ratability of each construct and item of the preliminary version of the PROM. The main outcome was consensus attainment, defined as strong (≥ 70%), moderate (50–69%) or low agreement (< 50%). Constructs and items with strong consensus were kept, moderate were sent to the next round and low agreement were rejected.

From the 61 experts contacted, 39 participated in the first round of the Delphi, with a 12.8% attrition at the second round (n = 34) and 38.2% at the third round (n = 21). The panel included mostly female academic experts from nursing and medicine backgrounds. The preliminary PROM included 19 constructs and 70 items; from these, 16 constructs and 50 items attained consensus. The consensus attainment process excluded three constructs and their items: awareness, weight control and social integration.

Consensus was reached for a patient-reported outcome measure adapted for people with multimorbidity including 50 relevant, improvable and self-ratable items categorized under 16 constructs. As more interventions tailored to multimorbidity are implemented, there is an increasing need for a valid measure of the effectiveness of these interventions. 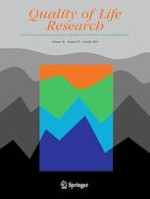 Support for the higher-order factor structure of the WHODAS 2.0 self-report version in a Dutch outpatient psychiatric setting

Health-related quality of life in adults with tetralogy of Fallot repair: a systematic review and meta-analysis

Health-related quality of life in patients with autoimmune hepatitis

Correction to: Health-related quality of life in adults with tetralogy of Fallot repair: a systematic review and meta-analysis