Emotional Understanding: Examining Alexithymia as a Mediator of the Relationship Between Mindfulness and Empathy | mijn-bsl Skip to main content
ZOEKEN MENU 1 2 3 4

The positive mental health correlates of mindfulness have become increasingly well-established. Recent literature has documented an association between the present-moment awareness and attention that is characteristic of mindfulness, and the capacity to adopt the emotions, cognitions, and perspectives of another individual, as displayed in empathy. The mechanisms underlying this relationship, however, are still poorly understood. This study aimed to examine alexithymia—or the difficulty identifying, labeling, understanding, and processing one’s own emotions—as a mediator of the relationship between five facets of dispositional mindfulness (i.e., observing, describing, acting with awareness, nonjudging, and nonreacting) and empathy in a sample of 616 undergraduate college students. Results revealed that alexithymia mediated the relationships between the describing and acting with awareness domains of mindfulness and cognitive empathy, while accounting for the effects of the other mindfulness subscales and participant sex. These findings suggest that the relationship between specific mindfulness skills and greater understanding of another individual’s emotional and cognitive experiences may be explained in part by one’s emotional self-awareness.
vorige artikel Testing the Relationship Between Social Anxiety Schemas, Mindfulness Facets, and State and Trait Social Anxiety Symptoms
volgende artikel A Qualitative Study with Healthcare Staff Exploring the Facilitators and Barriers to Engaging in a Self-Help Mindfulness-Based Intervention 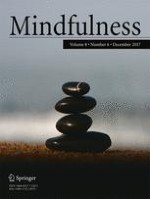 Erratum to: Implementing Mindfulness in the Mainstream: Making the Path by Walking It

Supports for Your Practice

Dispositional Mindfulness, Shame, and Compulsive Sexual Behaviors Among Men in Residential Treatment for Substance Use Disorders

The Impact of Mindfulness and Perspective-Taking on Implicit Associations Toward the Elderly: a Relational Frame Theory Account