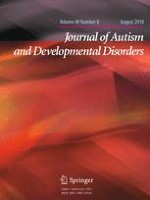 Towards a Treatment for Intolerance of Uncertainty for Autistic Adults: A Single Case Experimental Design Study