The characteristics of early developmental regression (EDR) were investigated in individuals with ASD from affected relative pairs recruited to the International Molecular Genetic Study of Autism Consortium (IMGSAC). Four hundred and fifty-eight individuals with ASD were recruited from 226 IMGSAC families. Regression before age 36 months occurred in 23.9% of individuals. The observed concordance rate for EDR within sibling pairs (18.9%) was not significantly above the rate expected under independence (13.5%, p = 0.10). The rate of regression in individuals with ASD from multiplex families was similar to that reported in singleton and epidemiological samples. Regression concordance data were not supportive of a separate familial influence on EDR, other than as a part of autism itself.
vorige artikel The Double ABCX Model of Adaptation in Racially Diverse Families with a School-Age Child with Autism
volgende artikel Honing in on the Social Phenotype in Williams Syndrome Using Multiple Measures and Multiple Raters 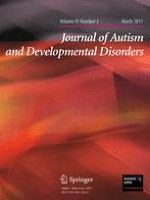