Psychosocial deprivation is associated with the development of socially aberrant behaviors, including signs of disinhibited social engagement disorder (DSED). In longitudinal studies, signs of DSED have been shown to decrease over time, especially as children are removed from conditions of deprivation. What is less clear is whether signs of DSED in early childhood are associated with poorer functioning in early adolescence, including among children who no longer manifest signs of DSED at this age. In a sample of 136 Romanian children from the Bucharest Early Intervention Project (BEIP), who were exposed to early psychosocial deprivation in the form of institutional care, we examined caregiver-reported (ages 30, 42, and 54 months and 12 years) and observer-rated (age 54 months) signs of DSED. Competent functioning in early adolescence (age 12 years) was assessed across seven domains (i.e., family relationships, peer relationships, academic performance, physical health, mental health, substance use, and risk-taking behavior). A diagnosis of DSED in early childhood was associated with reduced competence in early adolescence. Furthermore, this association was significant even when signs of DSED diminished by age 12 years. We conclude that signs of DSED in early life are associated with reduced likelihood of competent functioning many years later in adolescence, even if signs of the disorder remit.
vorige artikel Suicide Attempts and Course of Suicidal Ideation among Puerto Rican Early Adolescents 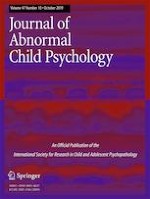