Objective behavioral assessment of autism spectrum disorder (ASD) in early childhood is essential for guiding appropriate treatment and intervention. In contrast to Western societies, validated measures of ASD are very limited in different Chinese contexts. The present study attempted to examine the construct validity of the Chinese version of Psycho-Educational Profile-3rd edition (CPEP-3). The CPEP-3 was administered to a sample of 455 children with ASD and a comparison group of 281 children without ASD. As predicted, older children scored significantly higher than younger children on different subtests of CPEP-3, and there was no gender difference within the autistic group. The construct validity of the CPEP-3 was further supported by the high internal consistency of each subtest as well as the moderate to large correlation coefficients among subtests. In line with the theoretical model, confirmatory factor analysis showed the three-factor model of the Performance test fitted well. In conjunction with the data reported previously, the present findings provided sound evidence for the construct validity of CPEP-3.
Opmerkingen
The authorship is equally shared by Daniel Tan Lei Shek and Lu Yu.

Data were collected from 455 children who were diagnosed as having autism or other pervasive developmental disorders (PDDs) in 25 service units in the Heep Hong Society including special child care centers, early education and training centers, and parent resource centers. Another sample of 281 children without developmental problems was also selected as the “normal sample” from 13 local kindergartens matched for age with the autistic sample for comparison. The diagnoses of the autistic sample were made based on ICD-10/DSM-IV by consultant psychiatrists and endorsed by a multidisciplinary team consisting of clinical psychologists, special educators, and other helping professionals. Several subgroups of participants were randomly selected for the analyses of test–retest reliability, inter-rater reliability, and criterion-prediction validity (Shek and Yu 2013). Specifically, based on a subsample of 42 autistic children, correlation coefficient for each subtest at two time points over a period of 6 weeks to 3 months ranged from 0.84 to 0.99, suggesting good test–retest reliability. Inter-rater reliability indicated by polychoric correlation coefficients for each pair of items rated by two experienced examiners ranged from 0.34 to 0.78 (n = 46). Criterion-prediction validity was also found to be good. Details of the study were reported elsewhere (Shek and Yu 2013).
Participants’ age ranges from 2.0 to 7.9 years. Table 1 summarizes the characteristics of the two samples in terms of age and gender. For the autistic sample, the ratio of boys to girls is 6:1, reflecting the fact that boys had higher risk of autistic disorders than did girls. While this figure was higher than the related ratio in the American normative sample (4:1); it was highly similar to the findings of a large epidemiological study of autistic spectrum disorder in which the male to female ratio was found to be 6.58:1 in Hong Kong children (Wong and Hui 2008b).
Table 1
Demographic characteristic of the samples

The present study was conducted at the Heep Hong Society, which has over 30 service units in different parts of Hong Kong. Children with a suspected diagnosis of ASD are referred to the service centers of the Heep Hong Society by different hospitals and schools in various areas of Hong Kong. Children with problem behaviors and developmental delay are also brought to the centers by their caregivers or teachers. For the present study, a group of professionals including speech therapists, occupational therapists, developmental psychologists, and preschool teachers administered the Performance tests and rated the participants. All raters had experience working with and testing young children. Before the formal launch of the validation study, the raters worked together to clarify and get familiar with general testing, scoring and interpreting procedures of the CPEP-3 to ensure consistency in the test administration.
For the Caregiver Report of the CPEP-3, the researchers explained the procedure and purpose of the test and gave clear instructions on how to fill in the report to parents. The Caregiver Report was then completed by either the mother or father of the participating child. During the process of completing the report, one researcher was present and gave explanations when parents had any doubts regarding the questions. The researchers who administered the Performance Test were blind to the scores of Caregiver Report, and vice versa. For parents of the normal sample, they only completed the personal self-care (PSC) subtest in the Caregiver Report as the items for problem behavior (PB) and adaptive behavior (AB) are not applicable to normal children.

The PEP-3 developed by Schopler et al. (2005) has two major parts: Performance and Caregiver Report. The 172-item Performance section is composed of 10 subtests. Three subtests measure communication ability including cognitive verbal/preverbal (34 items), expressive language (25 items), and receptive language (19 items). Another three subtests measure motor ability: fine motor (20 items), gross motor (15 items), and visual-motor imitation (10 items). These six subtests focus on the child’s development level. The remaining four subtests measure maladaptive behaviors, including affective expression (11 items), social reciprocity (12 items), characteristic motor behaviors (15 items), and characteristic verbal behaviors (11 items). The Caregiver Report consists of 38 items which are combined into three subtests: problem behavior (10 items), personal self-care (13 items), and adaptive behavior (15 items).
Authorized by the PEP-3 developers, the Heep Hong Society organized a working group to translate the PEP-3 items into Chinese, with the first author as the chairman of the specialist working group. The translated draft was then reviewed and modified by the group after discussion. Compared with the English version of the PEP-3, major changes in the CPEP-3 were in the areas of language and use of stimuli. Adaptation and modifications were made after taking into account the cultural and language factors. Chinese words were used to replace the English ones in the items for letter matching, naming and sorting, and a few more culturally suitable pictures were used to replace the original ones. The translated test is administered in Cantonese. The scoring of items has been quantified as 0, 1, and 2, with “Pass” = 2, “Emerge” = 1, and “Fail” = 0. In the present study, raw score obtained from each item was used for all data analyses.

First, correlation coefficients between participants’ raw scores on CPEP-3 subtests and age were computed to provide evidence for the first two types of construct validity: correlations with related and unrelated variables (Hypotheses 1a and 1b). To examine the relationship between CPEP-3 and gender, a MANOVA was conducted with participants’ scores on different subtests served as dependent variables and gender as independent variable (Hypothesis 1c). Second, to investigate differences between contrasted groups, another MANOVA was conducted to compare typically developing children and autistic children in their CPEP-3 Performance subtest scores (Hypothesis 2).
Third, factorial validity was tested by computing the correlation coefficients among different CPEP-3 subtest scores (Hypothesis 3) and performing a confirmatory factor analysis based on the autistic sample of children (Hypothesis 4). The hypothesized factorial model consists of three latent variables (i.e., the three CPEP-3 composites) and ten observed variables (i.e., the ten subtests). The three composites (Communication, Motor, and Maladaptive Behavior) were allowed to be correlated because they measure related but different aspects of development and behavior. It is assumed that each subtest has a non-zero loading on its related factor and zero loadings on other factors. Specifically, CVP, EL, and RL load on Communication; FM, GM, and VMI load on Motor, and AE, SR, CMB, and CVB load on Maladaptive Behavior. Using AMOS 17.0, 455 autistic children’s raw scores on the 10 Performance subtests were subject to the CFA Procedure using maximum likelihood method. To evaluate how well the model fits the sample data, five indexes of model fit were calculated, including the comparative fit index (CFI), Tucker and Lewis’s index of fit (TLI), normed fit index (NFI), root mean square error of approximation (RMSEA), and standardized root mean square residual (SRMR). Although the criterion for acceptable model fit varies from study to study, the same rules used by the PEP-3 developers were adopted: (a) CFI, TLI, and NFI values should be equal to or above 0.90 to indicate a satisfactory model fit, with values close to 1 suggesting a very good fit on any of the indexes; (b) for RMSEA, a value of less than 0.08 indicates a reasonable fit and a value of less than 0.05 or less indicates good model fit in relation to the degrees of freedom. In addition, as SRMR was advocated as the most sensitive to structural model misspecification (Hu and Bentler 1995), it was adopted as an extra index in this study. A value of less than 0.08 is generally considered as a good fit.
Lastly, internal consistency of the instrument was examined by calculating the item-total correlation of each subtest using the autistic sample, which would add “validity and accuracy to the interpretation of” (Tavakol and Dennick 2011, p. 55) the data based on the instrument.

Correlations with Age and Gender (Hypotheses 1a, 1b and 1c)

The development and validation of the Chinese PEP-3 was financially supported by the Keswick Foundation and carried out by the Heep Hong Society in Hong Kong. We thank colleagues of the Heep Hong Society for collecting the data for the validation study.
Open AccessThis article is distributed under the terms of the Creative Commons Attribution License which permits any use, distribution, and reproduction in any medium, provided the original author(s) and the source are credited.
vorige artikel A Longitudinal Examination of the Relation Between Parental Expressed Emotion and Externalizing Behaviors in Children and Adolescents with Autism Spectrum Disorder
volgende artikel Oblique Orientation Discrimination Thresholds Are Superior in Those with a High Level of Autistic Traits
insite
INHOUD
share
DELEN 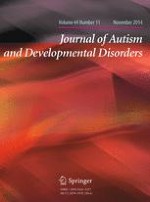 Are We Under-Estimating the Association Between Autism Symptoms?: The Importance of Considering Simultaneous Selection When Using Samples of Individuals Who Meet Diagnostic Criteria for an Autism Spectrum Disorder

Autism Spectrum Disorder (ASD) and Unlawful Behaviour: Where Do We Go from Here?

Differences in the Efficiency of Pattern Encoding in Relation to Autistic-Like Traits: An Event-Related Potential Study