To assess the responsiveness of the KQoL-26 and demonstrate minimal change for this instrument in two different samples of patients with suspected internal derangement of the knee.

Data were collected from two surveys conducted alongside a clinical trial: the arthroscopy sample and the general practitioner (GP) sample. The effect size (ES) was used to assess responsiveness. Anchor-based minimal change included minimal clinical important difference (MCID) and receiver operator characteristic curves; standardized error of measurement and minimal detectable change (MDC) was employed for distribution-based approaches. The KQoL-26 results are compared with those for the Lysholm Knee Score, EQ-5D and SF-36.

The arthroscopy sample consisted of 121 participants and the GP sample of 218 participants at baseline. The largest ES was found for the KQoL-26 emotional functioning scale in both samples. The results were in favour of the condition-specific instrument. The MCID for KQoL-26 physical functioning, activities limitations and emotional functioning scales were 3, 15 and 18, respectively, in the arthroscopy sample; they were 11, 16 and 24 in the GP sample. The MDC 95 % was estimated as 18, 28 and 34, and 15, 24 and 30 in each sample, respectively.

The KQoL-26 emotional functional scale was the most responsive of all scales. It is recommended that an instrument such as the KQoL-26 that includes emotional functioning should be included rather than the Lysholm in future clinical trials of patients with suspected internal derangement of the knee. 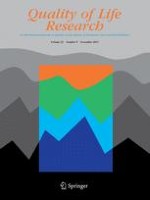 Physical activity and health-related quality of life among adult women in Cali, Colombia: a cross-sectional study

Does providing feedback on patient-reported outcomes to healthcare professionals result in better outcomes for patients? A systematic review

Comparison of the responsiveness of the SF-36, the Oxford Knee Score, and the Knee Society Clinical Rating System in patients undergoing total knee replacement