To sum up, this study set out to test the effects of holding dual identities as being both employed and a mother, and of perceiving conflict between these identities, on well-being indices among a sample of mothers. It was expected that being more strongly identified as both an employed person and a mother will be associated with greater well-being (Hypothesis 1). It was further expected that perceived identity conflict between being a mother and being employed would have a negative impact on well-being (Hypothesis 2). This was tested with an experimental approach, which manipulated levels of perceived identity conflict. Last but not least, it was expected that stressors associated with employment and parent identities would interact with identity conflict (experimentally manipulated) in their effect on well-being (Hypothesis 3).

Two hundred and eight women based in the UK participated in the study (mean age 38.25 years, SD = 5.35). A small minority were single mothers (N = 15). Education levels varied from completing basic high-school education through to postgraduate degree qualifications. For 3.9% the highest educational attainment were GCSEs (General Certificate of Secondary Education) which are obtained after 11 years of schooling. 5.8% had a vocational training such as a NVQ (National Vocational Qualification) obtained after 11 or more years of schooling. Neither GCSEs nor NVQs typically allow access to higher education (i.e., university-level study). 6.8% had A levels which are obtained after 13 years of schooling and which enable university entry, 22.7% had an undergraduate university degree, and 60.9% had a postgraduate university degree. Seventy-five women had one child, 106 had two children, 23 had three children, and 4 had more than three children1. Overall, then, this was quite a highly educated sample.
At the start of the study, participants were told that, for the purpose of this study, an ‘employed person’ is someone who currently earns a regular salary paid by an employer, or someone who is self-employed. They were told that a person who is ‘not employed’ is defined as someone who is currently not in paid employment. On this basis, 163 participants classified themselves as employed, and 45 participants classified themselves as not employed.

Participants were contacted via online forums (e.g., netmums.co.uk) and asked to complete an online or paper-and-pencil questionnaire. Participation was also invited (online or paper-and-pencil, as preferred by the participant) at a primary school in the greater London area, and mother-baby groups in East Dulwich, London. The researchers recruited participants using a snowballing method, whereby participants were asked to disseminate links to the survey to other potential participants in their networks.
The research was approved by the College Ethics Committee at Royal Holloway University of London. All aspects of the research were in line with American Psychological Association (APA) ethics guidelines, as well as those of the British Psychological Society (BPS). All participants gave informed consent by signing a paper or online consent form prior to participating. Participation was voluntary and no monetary compensation was offered.
The following manipulation and measures are the ones that employed mothers were exposed to. The small sub-sample of mothers who indicated to be unemployed also responded to the questions on well-being.

Manipulation of Identity Conflict Between Being a Mother and Employed

Following the experimental manipulation (described above), the following scales were administered. All items for all constructs were measured with 7-point Likert scales (0 = “not at all” to 6 = “very much”). ‘Identification with being a mother’ was measured with a four-item scale (based on Brown et al., 1986): “I feel strong ties with other mothers;” “Being a mother is an important aspect of my person;” “In general, I am glad that I am a mother;” and “I identify with being a mother,” α = 0.75.
‘Identification with being employed’ was measured (for employed participants only) with the same four items, but this time the items focused on the participants’ identity as an employed person, e.g. “Being an employed person is an important aspect of my person;” “In general, I am glad that I am employed”, α = 0.84.
A three item scale to measure ‘dual identity’ after Simon et al. (2013) was also included: “I feel I belong as a mother as well as an employed person;” “Sometimes I feel more like a mother and sometimes more like an employed person, it depends on the situation;” and “I have many similarities with mothers as well as other employed people,” α = 0.71.
‘Parenting-related stress’ was measured with three burnout items and five items related to anxiety and somatic complaints (adapted from Firth et al., 2004), making up an 8-item scale: “I feel emotionally drained by motherhood;” “I feel burned out by motherhood;” “I feel frustrated by motherhood;” “I feel tense whilst child caring;” “I lose my appetite because of my child-related problems;” “Child-related problems keep me awake at night;” “Child-related problems make my stomach upset;” and “Child-related problems make my heart beat faster than usual,” α = 0.86.
‘Job-related stress’ was measured with the same 8 items, but this time items were focused on employment, not motherhood (e.g., “I feel emotionally drained by my job”), α = 0.92. The job-related stress measures were only completed by those who had indicated to be employed.
To measure psychological well-being for all participants, including both employed and unemployed mothers, we utilized two indicators that are frequently used as proxies of this construct: Diener et al.’s (1985) life satisfaction concept, and Rosenberg’s (1965) self-esteem index.
‘Life satisfaction’ was assessed with five items taken from Diener et al. (1985): “In most ways my life is close to my ideal;” “The conditions of my life are excellent;” “I am satisfied with my life;” “So far I have gotten the important things I want in life;” and “If I could live my life over, I would change almost nothing,” α = 0.89.
‘Self-esteem’ was assessed with 10 items taken from Rosenberg (1965): An example item is “I take a positive attitude toward myself,” α = 0.90. The data for this study can be found here: https://​osf.​io/​qvcm2/​?​view_​only=​13778790b7c34ff6​94340b3ad98cef99​.

The authors declare no competing interests.

All participants gave informed consent to participate and to publish.
Open Access This article is licensed under a Creative Commons Attribution 4.0 International License, which permits use, sharing, adaptation, distribution and reproduction in any medium or format, as long as you give appropriate credit to the original author(s) and the source, provide a link to the Creative Commons license, and indicate if changes were made. The images or other third party material in this article are included in the article’s Creative Commons license, unless indicated otherwise in a credit line to the material. If material is not included in the article’s Creative Commons license and your intended use is not permitted by statutory regulation or exceeds the permitted use, you will need to obtain permission directly from the copyright holder. To view a copy of this license, visit http://​creativecommons.​org/​licenses/​by/​4.​0/​.
Publisher’s note Springer Nature remains neutral with regard to jurisdictional claims in published maps and institutional affiliations.
vorige artikel Young Adult Children of Mothers Coping with Mood Disorders: Maternal Relationship Quality, Family Stigma, and Psychological Well-Being
volgende artikel An Equine-Assisted Therapy for Youth with Mild to Moderate Anxiety: Manual Development and Fidelity
insite
INHOUD
share
DELEN 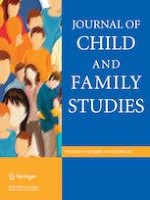 Changing Attitudes about Spanking: a Mixed-Methods Study of a Positive Parenting Intervention