This study examined whether color perception is atypical in children with autism. In experiment 1, accuracy of color memory and search was compared for children with autism and typically developing children matched on age and non-verbal cognitive ability. Children with autism were significantly less accurate at color memory and search than controls. In experiment 2, chromatic discrimination and categorical perception of color were assessed using a target detection task. Children with autism were less accurate than controls at detecting chromatic targets when presented on chromatic backgrounds, although were equally as fast when target detection was accurate. The strength of categorical perception of color did not differ for the two groups. Implications for theories on perceptual development in autism are discussed.
vorige artikel Regression, Developmental Trajectory and Associated Problems in Disorders in the Autism Spectrum: The SNAP Study
volgende artikel Violent Crime in Asperger Syndrome: The Role of Psychiatric Comorbidity 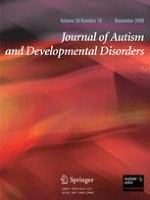 An Investigation of Sleep Characteristics, EEG Abnormalities and Epilepsy in Developmentally Regressed and Non-regressed Children with Autism

LEGO ® Therapy and the Social Use of Language Programme: An Evaluation of Two Social Skills Interventions for Children with High Functioning Autism and Asperger Syndrome