Cognitive vulnerability-stress models explain depression as the result of an interaction between negative cognitive styles and stressful life events; however, the specific content of the cognitive diathesis varies by model.

This study examined three cognitive diatheses (i.e., unprimed cognitions, cognitive reactivity, and mood reactivity) in a prospective longitudinal design assessing currently non-depressed college students (N = 322) at the start of the semester with follow-up at the end of the semester, approximately 3 months later. At baseline, depressive symptoms, major depression history, negative life events in the past year, unprimed dysfunctional attitudes, and both cognitive reactivity and mood reactivity over a dysphoric mood induction were assessed. Depressive symptoms and negative life events in the interim were assessed at follow-up.

Results suggest that different vulnerabilities may be relevant to predicting increases in depressive symptoms over time in those individuals who have not previously been depressed vs. those who have. 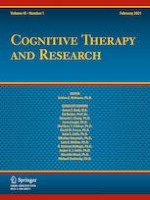 Developmental Differences in Child and Adolescent Reasoning About Anxiety Sensations

Psychotherapy, Atomoxetine or Both? Preliminary Evidence from a Comparative Study of Three Types of Treatment for Attention-Deficit/Hyperactivity Disorder in Children