The ‘Patient Reported Outcomes Following Initial treatment and Long-term Evaluation of Survivorship’ (PROFILES) registry collects patient-reported outcomes (PROs) from short- and long-term cancer survivors in the Netherlands, in a population-based setting. The aim of this analysis is to assess the generalizability of observational PRO research among cancer survivors by comparing socio-demographic and clinical characteristics, and survival of participants and non-participants in cancer survivors invited for questionnaire research through the PROFILES registry.

Between 2008 and 2015, cancer survivors with different cancer diagnoses (N = 14,011) were invited to participate in PROFILES registry studies, of whom 69% (N = 9684) participated. Socio-demographic and clinical characteristics and survival data, collected through the Netherlands Cancer Registry, were associated with participation versus non-participation in multivariable logistic regression analyses and cox proportional hazard regression models, respectively.

Participants had a significantly better survival compared to non-participants (HR = 1.47, P < .01). Participation was associated with male gender, being 60–70 years old, high socio-economic status, receiving any treatment, receiving radiotherapy, having no comorbidities, and a cancer diagnosis 2–3 years before invitation. Sensitivity analysis demonstrates that the health-related quality of life (HRQoL) might be up to 1.3 points lower (scale 0–100) using hot deck imputation compared to non-imputed participant data.

Cancer survivors not participating in observational PROs research significantly differ from participants, with respect to socio-demographic and clinical characteristics, and survival. Their HRQoL scores may be systematically lower compared to participants. Therefore, even in PRO studies with relatively high participation rates, observed outcomes may represent the healthier patient with better outcomes.

Patient-reported outcomes (PROs) are increasingly being used in patient-centered outcome research to support informed health care decisions [1]. Relying on individual patient participation, PROs are subject to bias, of which non-response bias has raised high concerns [2]. If certain patients are underrepresented in PRO research, the generalizability of the outcomes are likely to be affected, which may in turn negatively impact the usability in (shared) informed decision making [3, 4]. Yet, few attempts have been made to quantify and interpret associations with non-participation in PRO research [5, 6].
The ‘Patient Reported Outcomes Following Initial treatment and Long-term Evaluation of Survivorship’ (PROFILES ) registry is a large and dynamic population-based cohort for the study of the physical and psychosocial impact of cancer and its treatment [7]. Since 2008, the PROFILES registry has been used to collect PROs among both short- and long-term cancer survivors in observational population-based studies in the Netherlands. Over 20,000 individuals having cancer at 16 different cancer sites were approached to date. Complete and comprehensive supplemental data on socio-demographics, clinical characteristics, and survival are available for the full population of participants, as well as for the non-participants, through the Netherlands Cancer Registry (NCR) and linkage with the Dutch municipal personal records database.
Although it has been widely acknowledged that selection bias is present in observational PRO research, few studies among cancer survivors have access to non-participant data to assess whether their sample was representative and use strategies to adjust for non-participation bias [8‐12]. Furthermore, beyond basic socio-demographic data and sometimes limited clinical data, little is known about health-related quality of life (HRQoL) and survival of participants and non-participants in observational PRO research among cancer survivors. Information about (long-term) survival could provide new insights into the potentially unmeasured differences in HRQoL between participants and non-participants at time of invitation for a questionnaire. Based on the notion that individuals with a poorer health status may be less likely to participate in studies [2‐4], it was hypothesized that non-participants have a lower survival than participants that cannot be explained by differences in cancer stage or treatment at diagnosis alone. If true, cancer survivors with low survival and potentially poor initial HRQoL are underrepresented in observational PRO research.
The aim of the current study is to investigate characteristics and survival of participants compared to non-participants, among both short- and long-term cancer survivors invited for questionnaire research through the population-based PROFILES registry.

Data from the PROFILES registry were used. PROs are collected within a sampling frame of the NCR and can be linked with clinical data of all individuals newly diagnosed with cancer in the Netherlands [13]. The PROFILES registry started data collection of the first cohort of cancer survivors in 2008 and is still ongoing, including studies on various cancer types.

A detailed description of the data collection has been described previously [7]. In brief, in each study sample, cancer survivors were informed about the study via a letter by their (ex-)attending specialist. This letter contained either an informed consent form and a paper questionnaire, or a secured link to a web-based informed consent form and online questionnaire. In study samples where the secured link was provided, patients could return a postcard to request a paper-and-pencil questionnaire. Data from the PROFILES registry are freely available for non-commercial scientific research, subject to study question, privacy and confidentiality restrictions, and registration (http://​www.​profilesregistry​.​nl).

The current analyses include 12 study samples from the PROFILES registry in which similar core PRO questionnaires and methodology of data collection were used, with inclusion between May 2008 and April 2015. Table 1 describes the number of cancer survivors, inclusion criteria, cancer type, research purpose, design, and questionnaires collected by study sample (Table 1). In all study samples, participants were excluded if they were not able to complete a Dutch questionnaire according to their current or former (if not under follow-up) attending specialist (i.e., cognitive impairment, non-native speaker, too ill to participate). Individuals that died or emigrated prior to the start of the study were excluded, according to data from the hospital of diagnosis and/or data from the Dutch municipal personal records database. The Dutch municipal records database collects mortality and residential data from all citizens through municipal registries. Further, some patients (N = 10) could not be linked to clinical data from the NCR and were therefore excluded from analysis. If the same individual was invited for participation in multiple studies, data of the first questionnaire were included in the current analysis. Ethical approval was obtained for all study samples separately, from a local certified medical ethics committee.
Table 1
Study sample characteristics
aNon-participants were unverifiable when registered address did not correspond with national zip code registration. For three study samples, no address check had been done (unverifiable unknown)
bParticipation rate of those verifiable is calculated by dividing all participants by the participants and verifiable non-participants

Patients invited for participation, the questionnaires received, and patients for whom the address was unverifiable were collected through the PROFILES registry. Address checks had been done to verify whether the registered address corresponded with national zip code registration. In three study samples unverifiable addresses have not been determined (Table 1). Participants included all individuals that returned the questionnaire. Non-participants included all individuals that did not return the questionnaire, including those for whom the address was unverifiable. Initial date of invitation for questionnaire participation was registered for all (non-)participants in PROFILES.
Socio-demographic and clinical data were obtained from the NCR, while mortality data were obtained from the Dutch municipal personal records database. Socio-demographic variables include date of birth, sex, and socio-economic status (SES). SES was based on postal code of the residence area of the patient, combining aggregated individual fiscal data on the economic value of the home and household incomes, and was categorized into low, medium, high, or institutionalized/unknown [14].
Clinical data include tumor type, stage, primary treatments received, date of diagnosis, and comorbidities at time of diagnosis. Tumor type was classified according to the third International Classification of Diseases for Oncology (ICDO-3) [15], and cancer stage was classified according to TNM [16] or Ann Arbor Code (Hodgkin lymphoma and Non-Hodgkin lymphoma). TNM 5 was used for patients diagnosed from 2002 to 2003, TNM 6 for patients diagnosed from 2003 to 2010, and TNM 7 was used for patients diagnosed from 2010. For Chronic Lymphocytic Leukemia, Multiple Myeloma, and borderline ovarian cancer, stage was not determined nor registered. Primary treatments received were classified into surgery, systemic therapy (chemotherapy, targeted therapy, immune therapy), radiation therapy (including brachytherapy), hormone therapy, no treatment/active surveillance or unknown. Comorbidity was classified using a modified version of the Charlson Index [17] and categorized into no comorbidity, 1 comorbidity, or more than 1 comorbidity. Patients being alive at time of analysis, patients that died during follow-up, and date of death were obtained from the Dutch municipal personal records database and was last verified on February 1, 2017.
Age at time of questionnaire invitation was determined by the difference in patients’ date of birth (obtained from NCR) and date of invitation for questionnaire participation. The time since diagnosis at time of questionnaire invitation was categorized into four quartiles: 0–2 years, 2–3 years, 3–5 years, and > 5 years.
The EORTC QLQ-C30 (version 3.0) was used to assess health-related quality of life (HRQoL) in the participants [18]. The scores were linearly transformed into a score between 0 and 100 [19].

Ethical approval was obtained for all study samples separately, from a local certified medical ethics committee. All procedures performed in studies involving human participants were in accordance with the ethical standards of the institutional and/or national research committee and with the 1964 Helsinki declaration and its later amendments or comparable ethical standards.

Informed consent was obtained from all individual participants included in the study.
Open AccessThis article is distributed under the terms of the Creative Commons Attribution 4.0 International License (http://​creativecommons.​org/​licenses/​by/​4.​0/​), which permits unrestricted use, distribution, and reproduction in any medium, provided you give appropriate credit to the original author(s) and the source, provide a link to the Creative Commons license, and indicate if changes were made.
vorige artikel The importance of national levels of eudaimonic well-being to life satisfaction in old age: a global study
insite
INHOUD
share
DELEN 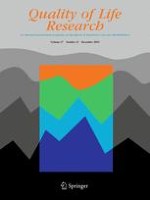 Correction to: Measuring quality of life in children with spinal muscular atrophy: a systematic literature review

Impact of untreated dental caries severity on the quality of life of preschool children and their families: a cross-sectional study

The importance of national levels of eudaimonic well-being to life satisfaction in old age: a global study