Attentional biases, particularly difficulty disengaging, have been found in contamination obsessive–compulsive disorder (OCD) and may be a maintaining factor. Attentional bias modification (ABM) may reduce this bias and avoidance behavior. This study examined attentional biases in 54 individuals with contamination OCD symptomatology and whether ABM reduces biases and symptoms. Participants completed one 30 min session of either ABM training or a control task and a spatial cueing task before and after to assess attentional bias. Questionnaires and behavioral tasks were also completed. Participants returned for a follow up 1 month later. As expected, there was evidence of difficulty disengaging from threats directly and indirectly associated with disease. Attention training led to a reduction in this bias, which was maintained for 1 month. However, there was no improvement in avoidance or contamination fear on a behavioral task, contamination OCD symptoms, safety behaviors and anxiety. Implications for treatment of OCD are discussed. 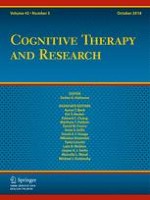