Although autism spectrum disorder (ASD) is associated with significant mental health concerns, little is known about suicidality, particularly among youth. To address this critical gap in the literature, the current study examined the predictive validity of (1) demographics, (2) core autism symptoms, (3) cognitive abilities and adaptive behavior, (4) comorbid psychopathology, and (5) medical problems, for suicide-related behaviors among autistic youth (N = 481; Mage = 11.56 years). As indices of suicide-related behaviors, parents reported on whether the child had ever (1) talked about killing themselves, and (2) engaged in deliberate self-harm or attempted suicide. These two suicide-related outcomes had distinct clinical correlates, including child age, parental education, restricted and repetitive behaviors, IQ and adaptive behavior, affective and conduct problems, and medical concerns. 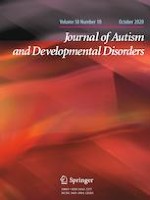 Measurement Properties of the Suicidal Behaviour Questionnaire-Revised in Autistic Adults

Is Camouflaging Autistic Traits Associated with Suicidal Thoughts and Behaviours? Expanding the Interpersonal Psychological Theory of Suicide in an Undergraduate Student Sample

What is the Prevalence of Self-harming and Suicidal Behaviour in Under 18s with ASD, With or Without an Intellectual Disability?

S.I.: Suicidality and Self-harm in Autism