Recent research suggests that although ethnic discrimination may have negative consequences for psychological well-being among youth of Chinese descent as it does for other ethnic groups, ethnic identity beliefs may buffer against such effects. Data for this study were drawn from the Early Adolescent Cohort Study, an investigation of contextual influences on the social, emotional, and academic adjustment of youth in ethnically diverse New York City middle schools. The present study sample consists of Chinese American (n = 84) and African American (n = 119) sixth graders. Results suggest that Chinese American youths’ own positive affect toward their ethnic group (private regard) was positively associated with higher self-esteem. In addition, the more favorably Chinese American youth perceived that others view their group (public regard), the fewer depressive symptoms they reported. In addition, among Chinese American youth, more favorable public regard attenuated the negative relationship between peer ethnic discrimination and depressive symptoms. The implications of these findings are discussed in light of the commonalities among ethnic and racial minority groups’ experiences of discrimination as well as the unique challenges that Chinese American youth face. 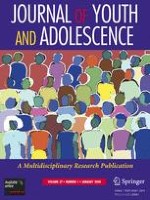 Maternal Predictors of Noncoital Sexual Behavior: Examining a Nationally Representative Sample of Asian and White American Adolescents Who Have Never had Sex

A Person-centered Approach to Studying the Linkages among Parent–Child Differences in Cultural Orientation, Supportive Parenting, and Adolescent Depressive Symptoms in Chinese American Families