This study investigated how discrete social information processing (SIP) steps may combine with one another to create distinct groups of youth who are characterized by particular patterns of SIP. SIP assessments were conducted on a community sample of 576 children in kindergarten, with follow-up assessments in grades 3, 8, and 11. At each age, four profiles were created, representing youth with no SIP problems, with early step SIP problems (encoding or making hostile attributions), with later step SIP problems (selecting instrumental goals, generating aggressive responses, or evaluating aggression positively), and with pervasive SIP problems. Although patterns of SIP problems were related to concurrent externalizing during elementary school, the consistency between cognition and future externalizing behavior was not as strong in elementary school as it was between grades 8 and 11. In some cases, youth characterized by the co-occurrence of problems in early and later SIP steps had higher externalizing scores than did youth characterized by problems in just one or the other.
vorige artikel The Moral Judgment of Juvenile Delinquents: A Meta-Analysis
volgende artikel Family Correlates of Comorbid Anxiety Disorders in Children with Attention Deficit/Hyperactivity Disorder 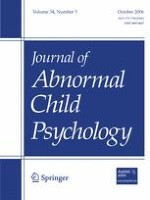 The Moral Judgment of Juvenile Delinquents: A Meta-Analysis

Reactivity of Tic Observation Procedures to Situation and Setting