Validation of the Modified Checklist for Autism in Toddlers, Revised with Follow-up in a Population Sample of 30-Month-Old Children in Iceland: A Prospective Approach | mijn-bsl Skip to main content
ZOEKEN MENU 1 2 3 4

The Modified Checklist for Autism in Toddlers, Revised with Follow-up was validated on a population sample in Reykjavik, Iceland. The participants (N = 1585) were screened in well-child care at age 30 months and followed up for at least 2 years to identify autism cases. The sensitivity, specificity, positive and negative predictive values were 0.62, 0.99, 0.72, and 0.99, respectively. True-positive children were diagnosed 10 months earlier than false-negative children. Autism symptom severity and the proportions of children with verbal and performance IQs/DQs < 70 were similar between groups. Although the sensitivity was suboptimal, the screening contributed to lowering the age at diagnosis for many children. Adding autism-specific screening to the well-child care program should be considered.
vorige artikel Childhood Disintegrative Disorder (CDD): Symptomatology of the Norwegian Patient Population and Parents’ Experiences of Patient Regression
volgende artikel Improving Beverage Choice in Adults with Developmental Disabilities: Implementation of a Token Reinforcement System in a Community Residential Setting 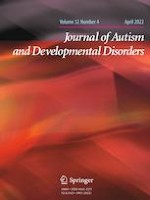 The Role of Acceptance in the Transition to Adulthood: A Multi-Informant Comparison of Practitioners, Families, and Youth with Autism