In Section III of the Diagnostic and Statistical Manual of Mental Disorders – fifth edition (DSM-5), an Alternative Model for Personality Disorders (AMPD) is proposed, including a criterion for personality functioning impairment (Criterion A) to assess severity of personality pathology. The present study examined the structure, reliability, and convergent validity of the Dutch version of a five-item screening scale for Criterion A—the Five-Item Screening Scale for Personality Disorders (FISSPD; Skodol et al., in Personality Disorders: Theory, Research, and Treatment, 2, 4-22, 2011)—in a community sample of 1,477 adolescents and 546 adults. To assess convergent validity, identity and personality (pathology) questionnaires were completed by adolescents and adults. Confirmatory factor analysis yielded a single factor structure for the FISSPD, which proved to be (partially) invariant across age and gender. Adequate reliability coefficients were obtained for the FISSPD. In both the adolescent and adult sample, significant correlations were found between the FISSPD and consolidated identity (negative) and disturbed identity/lack of identity (positive). In the adult sample, the FISSPD showed significant correlations with several personality disorders (and especially with the borderline personality disorder), maladaptive personality traits (Criterion B of the AMPD), and general personality impairment. In the adolescent sample, the FISSPD was positively correlated with borderline personality disorder characteristics. Furthermore, significant correlations were found with the Big-Five personality traits in the adolescent sample: the FISSPD correlated significantly positive with neuroticism, and negative with extraversion, agreeableness, and conscientiousness. In sum, the present study supports the reliability and validity of the FISSPD to screen for (severity of) personality pathology.
vorige artikel Longitudinal Associations Between the Five-Factor Model of Personality and The Bi-Factor Model of Psychopathology: Continuity, Pathoplasty and Complication Effects in Adolescents
volgende artikel The Relationship Between a Hierarchical Transdiagnostic Model of Vulnerability Factors and Posttraumatic Stress Disorder Symptom Clusters 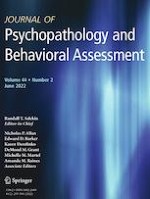 Attentional Processing of Threat in Bipolar Disorder: Going Beyond Mood-Congruency

Why We Imagine Our Future: Introducing the Functions of Future Thinking Scale (FoFTS)