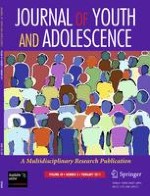 The Effect of School Dropout on Verbal Ability in Adulthood: A Propensity Score Matching Approach

National Identity of High-School Adolescents in an Era of Socio-Economic Change: Russia and Ukraine in the Post-Perestroika Period